But even though Stargirl focuses on the relationship between Courtney Whitmore and her stepfather/former superhero Pat Dugan (Luke Wilson), the series will also feature the Justice Society of America and their enemies, the Injustice Society. IGN can exclusively reveal the full rosters and cast members for both teams. Check out the new teaser image below for a closer look at both teams: 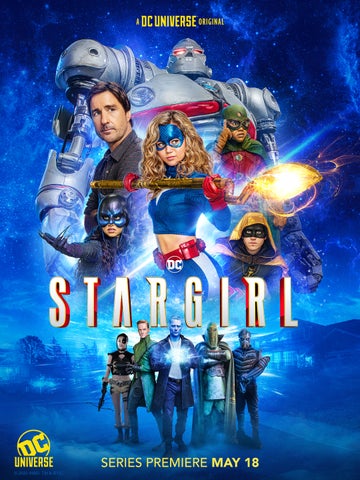 IGN also had the opportunity to speak to both Bassinger and executive producer/Stargirl co-creator Geoff Johns to find out more about the series and its take on the classic JSA team. read on to see what they had to say.

Stargirl is a very personal project for Johns. As he recounted in a heartfelt open letter to fans, the character was directly inspired by his late sister Courtney, who was among those killed in the explosion of TWA Flight 800 in 1996. Unsurprisingly, Johns was the main catalyst in getting the series off the ground. In fact, Stargirl was one of Johns’ first priorities after stepping down as DC’s Chief Creative Officer and establishing his production company Mad Ghost Productions.

“When I decided to go back and focus on writing and production, literally the first thing I wanted to do was Stargirl,” said Johns. “So I pitched it to Warner Brothers and DC, and Peter Roth and everyone over at Warner Brothers Television and DC Universe was really excited about it, loved the pitch, and then agreed on it to be a DC Universe series.”

Johns told us casting the right actress as Courtney Whitmore was a difficult process, with hundreds of actresses reading for the role. However, Johns said he knew right away that Bassinger was the ideal fit to play a character very near and dear to his heart.

“Immediately, right when she read for it, I knew she was Courtney,” he said. “She has the humor, she has the enthusiasm, the energy, the innate optimism, and Brec really embodies who Stargirl is, off-set as well as on. She’s just perfect. She made me laugh and she made me cry and she made me feel things in her audition, and it was great.”

Though Stargirl has appeared in live-action more than once (played by Britt Irvin on Smallville and Sarah Grey on DC’s Legends of Tomorrow), Bassinger told us she didn’t look to those versions for inspiration in her performance – the crucial difference being that those versions of Stargirl were depicted as seasoned veterans, whereas this Stargirl is very much a rookie heroine.

“That was an older, more mature version of Stargirl, and I think this follows the comics… well, at least the Stars and S.T.R.I.P.E. comics a little bit more, in that she’s young, high school, naive, which I wanted to bring that into this version of Stargirl.

Stargirl revolves heavily around the dynamic between Courtney and her stepfather Pat. Johns describes the series as a “superhero family show.”

Johns said, “It’s about Courtney Whitmore whose mom marries a man named Pat Dugan. And then they move from LA to a small town in Nebraska called Blue Valley. And it’s there that Courtney, who’s struggling to fit in in a small town, discovers that her new stepfather used to be Stripesy, the sidekick to Lester Pemberton, the former Star-Spangled Kid turned Starman. And she ends up taking a cosmic staff that belongs to Starman for a joy ride. And ultimately, through circumstances becomes Stargirl and Pat Dugan has to come out of retirement as a sidekick again and they have to discover and eradicate the evil that is lurking within this small town.”

But despite hinging on that family bond, Stargirl is also an ensemble series about multiple young heroes taking up the mantles of their predecessors. As the series opens, the original Justice Society of America has been killed, leaving it up to Courtney and fellow teen heroes like Yolanda Montez and Beth Chapel to fill that void. According to Bassinger, Stargirl is the de facto leader for this new JSA team, as she recruits her fellow classmates after discovering the Cosmic Staff.

“The thing that I love about these young characters is that the paths aren’t complete,” said Johns. “They don’t know where they’re going to be or what they’re going to be. And so, there’s all sorts of mistakes they can make and choices they can make, and who knows what their ultimate destiny will be? And that’s exciting to work on. Like a youthful superhero generation, high school kids taking on the mantles of the Justice Society. It makes for a lot of fun and a lot of unpredictability.”

For Bassinger, part of the fun of Stargirl is the chance to be a part of a heavily female-driven superhero series: “I think it brings a lot to see these female powerhouses. I think that’s very relevant, and people need to see that right now. But also personally, because I was going into it, getting three new girly friends, and that was fun for me.”

While the series features a relatively small Injustice Society lineup that mirrors the JSA team, Johns teased a wide range of villains over the course of the series. “Every character was chosen for a reason, that role that they fill in the story. There’s probably more than I originally imagined because there became more roles and ideas that sprung up in the development of the show. But you’ll see close to about everybody that’s a member of the Injustice Society of America [in the comics].”

And while the series may not be spotlighting certain classic JSA members like the Alan Scott version of Green Lantern and the Jay Garrick version of Flash, fans shouldn’t assume those characters won’t be showing up. The series will show us glimpses of the previous JSA team, with Johns hinting at potentially bigger stories to come down the road.

“[Green Lantern and Flash] are spoken of and they exist in the JSA. There’s a picture of them in the first episode, and there’s plans in the future for things, but Jay Garrick and Alan Scott, to me, are always the elderly statesmen. They’re the big heroes of the JSA and their shadow is very long and they’re great characters. They are a part of the original JSA and their legacies will be felt throughout the show. I don’t want to spoil too much about it, but I can leave it at that.”

Bassinger also hinted that original Dr. Mid-Nite Charles McNider has a significant role to play in Season 1. Johns said the series will look back even further than the original JSA, establishing the Seven Soldiers of Victory as Earth-2’s first superhero team and exploring the history of Stargirl’s Cosmic Staff. In short, expect the series to mine all sorts of classic DC Comics continuity.Crisis on Infinite Earths Links DC TV and Movie Universes – IGN Now

Stargirl’s Connection to the Arrowverse

The recent Crisis on Infinite Earths crossover revealed exactly where Stargirl fits into DC’s live-action multiverse, with a brand new version of Earth-2 appearing to replace the one previously seen on shows like The Flash and destroyed in Arrow’s Season 8 premiere. Not only is Stargirl linked to the Arrowverse, it’s also become the series that bridges The CW’s lineup with the DC Universe streaming service. New episodes will first premiere on DC Universe before airing on The CW the day after.

According to Johns, that arrangement wasn’t planned from the start, but came about after production had wrapped on Season 1 and The CW’s Mark Pedowitz had an opportunity to see footage. “I was incredibly excited about the opportunity for that because it just meant more people would see it. And totally, Stargirl and the show has always been for everybody. Anyone can watch it. So it fits in nicely to that world. It fits in nicely to things like The Flash, and so that was something that was new.”

Johns also described the series as being very similar in tone to classic ’80s movies like E.T.: The Extra-Terrestrial and Back to the Future.

DC fans are probably wondering whether Stargirl’s Arrowverse connection means we’ll eventually see Courtney Whitmore and other Earth-2 heroes appearing in future crossovers. Both Johns and Bassinger seem keen on the idea, though it doesn’t sound like crossovers are high on the priority list in Season 1.

Johns said, “The future is wide open in the DC multiverse, so anything can happen between film and TV. Who knows? Because that’s what the multiverse is. Obviously, right now the main concern is making sure that this show is great, that these characters are great, that they have their own stories and they get the proper screen time and the proper episodes to develop on their own. So hopefully in the future we can do something fun, but the first season is all about making sure that Stargirl is the best show it can possibly be.”

Bassinger told us there have already been preliminary discussions about a Flash/Stargirl crossover. “There have been talks of Stargirl getting to go on an episode of Flash, and having a bigger storyline, but it didn’t happen this season. But I just think that would be the coolest thing. So much of my family has watched Flash for years.”

While a Flash/Stargirl team-up sounds promising, Bassinger told us she’s even more eager for a Supergirl crossover. “Last night I was watching a bunch of interviews of Melissa [Benoist], and she’s just the best Supergirl. I bet Stargirl and Supergirl would be this dynamic duo. That would just be awesome. So yes, my hopes are high. I really, really hope for it. But as of now, nothing planned, but fingers crossed.”

Stargirl premieres on DC Universe on Monday, May 18, with new episodes airing weekly. Each episode will also air the following Tuesday on The CW.